We are an organization of Proton’s authorized center consist of 4S center and 3S service center. Our outlet located in Seri Kembangan, Puchong, Shah Alam, Semenyih and Kampar. We will provide you exceptional service and maintenance for your purchased Proton vehicle. You can entrust our service outlet to service your vehicle as our team is highly skilled and professional more than 15year experience in this field.

Recently, founded some article from Paul Tans and The star new, the national automaker had post a video revealing the feature of Proton first SUV ( Sport Utility vehicle) on the Proton official facebook page, in the facebook page you also can found that the Proton’s yet are inviting the public to vote and suggest the name for the SUV.

In the video it shows the SUV performing dynamic manoeuvres on a snow-covered landscape and a test trak. overall the first time that such premium safety and driver-assist technologies which are applicable in a Proton vehicle.

The new premium features which conducted inside which cover about 10 areas.

Proton’s first SUV will only be launched in quarter 4th this year, but hence the Proton is giving the public some more informational preview of the model ahead of that.

On display here is a mock-up of the SUV’s face, which doesn’t look that much different from what you’ll find on the Geely Boyue – the Proton SUV is based on this model.

Based on the safety and driver assist systems being touted for the Proton SUV, it isn’t far-fetched to say the rest of the vehicle will follow the updated Geely SUV too.

In a statement, Proton said its SUV “will be the first premium C-segment SUV produced by a Malaysian automotive brand and will be equipped with features usual­ly found in more expensive rivals including a long list of passive, active and cognitive safety systems”. 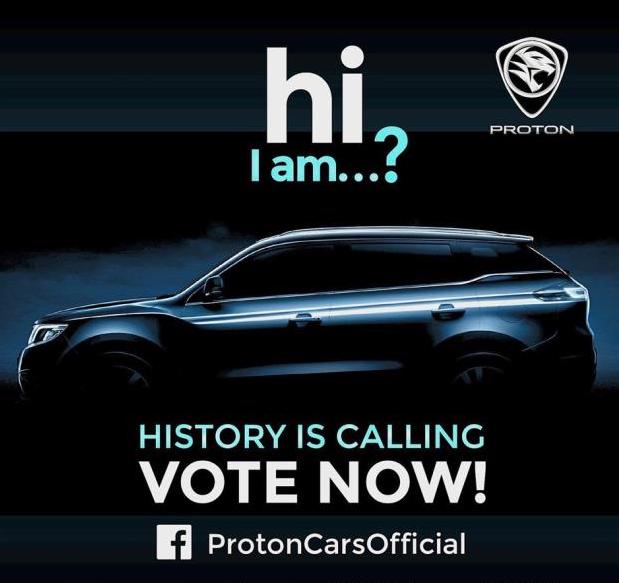 Lane keeping assist uses a came­ra to read lane markings and adjusts the steering to maintain the car safely within the lane.

The contest to name the new model in an ad by Proton.

Adaptive cruise control helps to avoid accidents by automatically keeping the car at a safe distance from the front vehicle, by using a radar sensor that measures the distance to the vehicle ahead, and also controlling the car speed.

Meanwhile, a 360-degree 3D view of the car is obtained via software that stitches visual data from came­ras placed around the car, and this can applicable during the car parking in a tight space.

As for voice command, this allows convenient to using a voice control for those car software like radio, navigation, phone calls, media entertainment and air-conditioning temperature.

The Proton SUV is due for a fourth-quarter launch, and is based on the popular five-seater Geely Boyue. The top-grade of this vehicle has a powerful 1.8-litre turbocharged engine, and a six-speed automatic transmission.

Meanwhile, the online poll will be open for all the Malaysian to given this New SUV a name, its deadline untill 30th April 2018.

Poll participants are in the running to get RM100,000 worth of gift vouchers while five winners will be chosen based on the best reasons given for the name they voted for.

Beside, those winner also will enjoy some money-cant-buy experience like consisting of exclusive VIP invite during the launching of new Proton SUV.

Also, if a proposed alternative name for the SUV is chosen, the lucky winner will get a 4D/3N tour package to Hangzhou and Shanghai for two people.

There has been a lot of hype surrounding the Geely Boyue, which has been confirmed to be a new Proton model following the signing of a definitive agreement between both parties. Many have been clamouring for more details about the Proton SUV, including when it will be introduced, and more importantly, how much it will cost about.

According to the second minister of international trade and industry Datuk Seri Ong Ka Chuan, the Boyue-based Proton SUV is estimated to arrive in Malaysia and with a price tag of under RM100,000.

In the report by China Press,Datuk Seri Ong Ka Chuan explained that the Malaysian government will soon liberalise its tax structure to encourage more foreign investment. This is to honour its promise to the WTO and ASEAN Free Trade Area to lower the excise duty on cars.

Datuk Seri Ong Ka Chuan therefore said the Boyue, which is priced at 110,000 yuan (RM69,537) in its native market, will likely see an estimated 10-20% price hike when it is introduced here. However, it remains to be seen if the SUV will be introduced as a fully imported (CBU) or locally-assembled (CKD) model, although the latter is the more likely of the two.

At the time of the signing, Proton and Geely said that while they want this model in Malaysia as soon as possible, discussions are still needed on things such as whether or not to kick-off with CBU units, as well as the levels of localisation.

So are you going to look forward too if the New Proton SUV is about 100k?

We are Proton’s authorized 4S center